While plenty of people flock to Arizona for outdoor adventures, this state in the Southwest continues to fly under the radar a bit when it comes to trout fishing.

That’s starting to change, though.

Word is starting to get out about the top-tier fishing for trout in Arizona. People love that they can drop in on some incredibly productive waters without having to elbow other anglers away as they do in other trout hotspots like Montana, for example.

If you’ve been thinking about heading down into Arizona to do a bit of trout fishing yourself you’ll want to use the inside information we highlight in this quick guide to help you hit the ground running.

Let’s jump right in, shall we?

How is the Trout Fishing in Arizona?

It’s kind of crazy that Arizona has been able to keep its world-class trout fishing a secret for as long as it has!

While you might not have the same kind of trout fishing opportunities here that you wouldn’t in places like Utah, Montana, Colorado, or even up in New Hampshire and Maine, many people consider fishing for trout in Arizona to be the best in the entire Southwest.

While lots of people think of Arizona as nothing but barren desert, the truth is Arizona is home to a lot of mountain streams, huge freshwater lakes, and more blueline creeks filled to the gills with trout than you could imagine.

It’s not hard to get into some really trouty water in this state. You just have to know where to look (and we help you with that in just a minute).

Do I Need Special Fishing Licenses or Stamps to Fish for Trout?

It used to be that you had to buy a general fishing license from the folks at Arizona Game & Fish. As well as secondary trout stamps, and sometimes even special equipment stamps if you really wanted to be efficient while fishing rivers, lakes, and creeks in this state.

Recently, though, Arizona Game & Fish has undergone a complete restructuring of its licensing program.

The General Fishing license (allowing you to fish pretty much any water in the state of Arizona, for any fish – including trout) is going to set you back $37 as a state resident or $55 as a nonresident.

The Combo Hunt & Fish licenses are going to set you back $57 as a resident and $160 as a nonresident. This is a pretty good deal if you’re going to be spending time hunting and fishing within Arizona state borders.

Both of these licenses (as well as every other license sold by Arizona Game & Fish) are good for 365 days from the day that it was purchased. These licenses no longer go for a calendar year, a welcome change to be sure.

What Kinds of Trout Can Be Found in Arizona?

Another reason that word is starting to spread about just how good fishing for trout in Arizona has to do with the number of trout species you’ll be able to catch in these waters.

Sure, you’ll be able to go for beautiful brook trout, fat rainbow trout, and monster brown trout with butter bellies. Arizona is home to some of the biggest in the country. But you’ll also find Apache trout, cutthroat trout, tiger trout, grayling, and Gila trout as well.

A fair amount of the trout you’ll find in Arizona water is going to be stocked trout, though. Only the Apache trout (the state fish) and the Gila trout are native to Arizona water – and both of them are incredibly rare and on the Endangered Species Act.

These two species of trout are (understandably) 100% catch and release fish, though the state has a number of Arizona Game & Fish programs put together to give anglers an opportunity to catch them in and enjoy them up close and personal, too.

Rainbow trout are probably the most common species of trout in Arizona water, ranking right up there with brook trout. They were introduced all the way back in 1898 and have turned into real river monsters.

Brown trout were introduced to Arizona shortly after that, somewhere around 1931. These butter bellies get gigantic, with the state record coming in close to 22 pounds, 14 ounces – and that was pulled out of Reservation Lake.

Cutthroat trout showed up sometime around the rainbows, in or around 1898. You’ll find plenty of these in the White Mountain Lakes area.

Arctic grayling were introduced in 1940. Tiger trout showed up in 1944, and brook trout (bookies) popped up in Arizona around 1903.

There’s plenty of trout fishing to be had in the state!

Is There a Trout Fishing Season in Arizona?

Across most of Arizona, you’ll be able to fish for trout year-round, without restriction, anywhere you find public water. Or you can get permission to fish on private water.

There are some restricted trout fishing seasons in Arizona, though, that you’ll need to know about.

Fishing for trout in Arizona is restricted to September 1 through March 31 every year on the following waters:

Outside of those exceptions, though, you’re pretty much good to go with trout fishing in the state. So long as you are licensed!

Are There Daily Catch Limits in Arizona?

There are also some restrictions on daily catch limits in Arizona for trout, again governed by specific waterways.

For example, on the Colorado River all the way to the Navajo Bridge you can pretty much catch as many trout as you like, as often as you like, with absolutely zero restrictions whatsoever.

You’re allowed to catch 10 trout on the Colorado River through to the California and Nevada boundaries, or out to the International Boundary.

The Colorado River Separation Canyon region to the California and Nevada boundaries, as well as Lake Mead and Lake Mohave currently have a five trout per day limit in place.

Two trout can be taken daily from spots like:

Some of the fishing for trout in Arizona areas that are particularly popular with anglers today are catch and release only, require anglers to use single-pointed and barbless hooks, or are even limited to fly fishers only.

These waters include (but are not limited to):

If you are going to be doing any trout fishing in a new spot in Arizona it’s not a bad idea to look at the regs for that waterway quickly online before you head out.

There’s a ton of information available from the Arizona Game & Fish organization 100% free of charge online.

Best Places to go Fishing for Trout in Arizona

Now that we’ve covered (almost) everything you need to know about getting ready to go fishing for trout in Arizona it’s time to dig a little bit deeper into where you’ll want to head first!

Lee’s Ferry on the Colorado River

If there’s just a single spot to spend a day fishing for trout in the entire state it would have to be on the Colorado River at Lee’s Ferry.

You’ll find this trout hotspot near Page in the northern part of Arizona. It’s a beautiful tailwater that flows 15 miles or so out from Lake Powell and runs to the northern Grand Canyon.

The water stays about 50°F all year round, is crystal clear, and is absolutely loaded with trout from top to bottom. Summertime is when this place gets a little crowded (especially with people wanting to swim and float the river), but in the fall, winter, and spring you’ll have a lot of Lee’s Ferry all yourself.

If you’re going to be fly-fishing you’ll want to make sure to bring plenty of nymphs and midge flies. You’ll be able to crush on the water with nothing but these critters 99% of the time.

This amazing trout water is located about 25 miles from Phoenix proper but still remains relatively uncrowded and often ignored, except for by trout fishers that are “in the know”.

The cold water in this river comes from the tailwaters of Saguaro Lake but you’re going to want to get yourself to the Coon Bluff and Goldfield areas of the river if you want to land big rainbows.

Every winter Arizona Game & Fish floods these waters with stocked rainbow trout, but all year round you’ll be able to go for brookies, rainbow holdovers, and a decent amount of browns as well.

Oak Creek runs through the Oak Creek Canyon in Sedona, Arizona, and makes it maybe the most beautiful trout water in the entire state.

It doesn’t take very long for you to forget you are in Arizona at all when you are standing in this water!

The overwhelming majority of the trout you’ll find in Oak Creek is going to be stockers, though. These come from the Page Springs Fish Hatchery and are usually going to be found a little bit lower than Grasshopper Point.

The water up near Grasshopper stays a little bit warmer all year round than the rest of Oak Creek, which makes it hard for trout to really thrive. Expect to find a lot more trout the further away you get from that point.

A big part of the popularity of Oak Creek, though, is because of its diverse population of different trout species.

Brook, brown, and rainbow trout are found here in huge quantities – and there’s plenty of other trout (including cutthroats and tigers) to be found, too.

Stick to the West Fork area and you’ll have an almost unlimited run at wild brown trout, including some real monsters. Woolly buggers, pheasant tail jigs, and BWO flies work like magic here.

Black River in the White Mountains

If you’ve had just about enough of the heat in Phoenix and would love to spend a little more time in the mountains you’ll want to get yourself to the Black River in the White Mountains ASAP.

One of the longest trout waterways in the state (you have more than 114 miles of fishing in front of you here), it’s almost impossible not to land some really decent-sized fish when you spend just a little bit of time on this water.

A freestone stream that loses a bit of water in the late summer and early fall, it’s not a bad idea to try and stick to later fall, early winter on through late spring fishing here at the Black River.

The upper portion of the water gives you a chance to go at Apache cutthroat trout, where even the smallest of these super rare trout are considered trophies. The lower section of the water is home to bigger brown trout and a decent amount of bass, too. 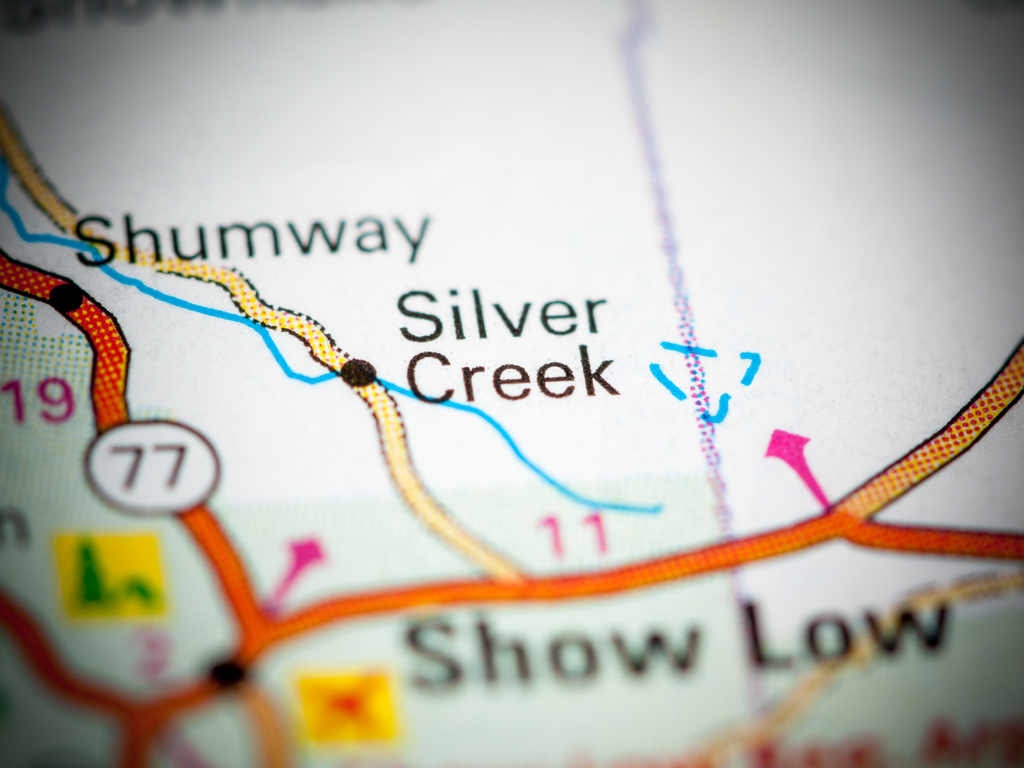 Silver Creek might not look like much on a map when you are planning to do a bit of fishing for trout but don’t let that dissuade you.

Sure, the stream itself is only about 2 miles long from start to finish. But the whole thing is owned and operated by the Arizona Game & Fish Department. That means it’s absolutely loaded with trout, perfectly maintained, and always well taken care of.

You’re probably going to want to fish from the banks of Silver Creek, if only because the actual River itself and be a challenge to wade. Plenty of people have done that, though, so it’s really up to you and your risk tolerance levels.

A big draw for this Creek (aside from the fact that it’s run by AGF) is that you can find native Apache and wild brook trout here pretty regularly. Fish in the mid-20 inches (and larger) have been pulled out of Silver Creek on a regular basis, too.

You’d have to be unlucky not to have a run at the trouty water found all across Arizona.

You might get some sideways glances/questioning looks when you tell people that you’re going trout fishing in Arizona. Especially if you are particularly geared up for it. But they just don’t know what they are missing out on yet.

You’re going to have a blast! 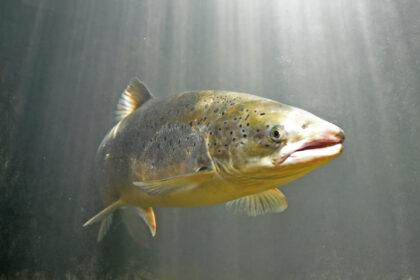 Are Trout and Salmon Related?

Fishing License Kentucky [How to, Where to, When] 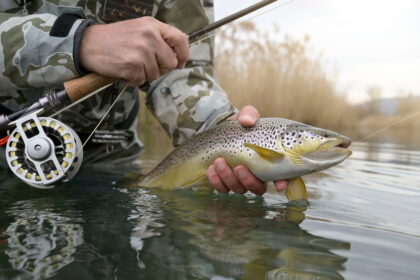